In 1968 Robert Propst invented what has become one of the most hated modern inventions: the cubicle. However, in 1968 it wasn’t the cubicle. It was Action Office II and it looked and functioned quite differently. 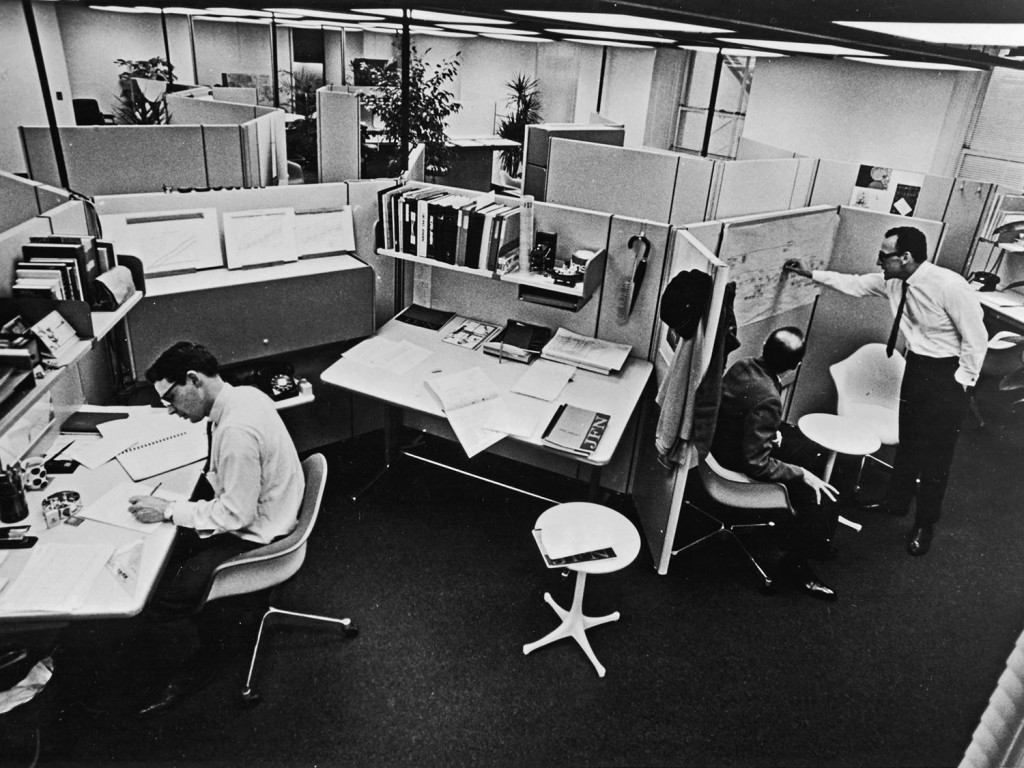 It is worth pointing out that the cubicle as many of us picture it today, looks nothing like what Propst originally designed. His design featured walls at obtuse angles, not enclosing the occupant so much. It was also an entire system, designed for flexibility – it could be applied to create areas for informal meetings or coffee breaks. It was a more apt solution than what it became.

When managers realised they could fit more people in with perpendicular walls, the cubicle as we know it was born. Ever since workers have decried their flaws. The walls of a cubicle obstruct air flow, while doing nothing to prevent noise pollution. In fact, hiding the source of noise visually has had more detriment than anything else. As workers faces were hidden, typical social cues that revealed one was doing something annoying to others were lost. In addition to blocking airflow and social cues, the cubicle walls also block light, preventing its natural benefits and also requiring the use of more costly (in many ways) artificial light.

Propst didn’t just suddenly invent Action Office II – he was commissioned to design furniture to solve office problems. What was this in response to? In 1968 it was in response to the much hated open plan office.

Quite ironically, it is arguable that it is the cubicle, now associated with dread and drudgery that has inspired the return to the open plan office. It has propagated the very thing it was created to destroy. Now, in the mid 2010s so many of our offices are open plan, flexible work spaces that are similar to the original 1960s German idea of Burolandschaft or “office landscape” that everyone at the time hated. As the Wall Street Journal claims, many open plan workers these days actually miss their old cubicles.

This story, about efficiency and work quality in offices gives us insight in to an element of creativity that many may not appreciate: its inherent contradictions.

Cognitive theories on creativity support this idea. One of these is known as the Geneplore Model. This model categorizes activities in the creative process as:

The generative is where pre-existing patterns of thinking are formed and retrieved from memory. Simple associations are made, patterns are combined, ideas are taken from one context and put in another, or reduced and deconstructed to more primitive forms (Handbook of Creativity, 1999, 191). In the Exploratory, a search begins for novel or desired attributes in these patterns. Metaphorical implications are analysed, functions are determined, practical and conceptual limitations tested and patterns are applied to real-world problems (Handbook of Creativity, 1999, 192).

Typically, if you propose two categories to represent a group of processes, these processes will fit in either one or the other. This is true in this case, but more, the processes that go into each category can have very opposing requirements.

Consider the cubicle story again. One can see how a social, open environment with lots of collaboration (open plan offices) could be very good to assist in creating a broad variety of ideas. However, to adequately test, analyse and apply these ideas a quiet, private space would be best. Here we can see how the seemingly conflicting requirements of the creative process can create confusion as to what the best way to address creativity is.

Would the solution be to offer both? Perhaps. That is a step in the right direction – however, there are many important factors to consider how you go about working towards every facet. Concepts of territory, ownership of space, distance from team members all begin to come into play. In addition, it is only natural that many of these factors will fight against each other, thus a holistic solution is required.

History on the cubicle from: Wall Street Journal and Economist.